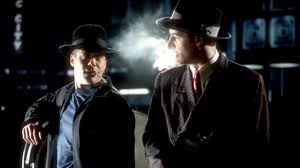 The Singing Detective, that is the original British miniseries, is unique, dense, mysterious, and original. It is not, however, all that much fun to watch. By turns bizarre and hallucinatory, it’s also relentlessly grim. So too is this, a 2003 adaptation starring Robert Downey Jr., only it’s a remake. A remake of something bizarre and unique starts off at a loss as far as I’m concerned. It’s no longer original and that was the miniseries main appeal. Downey Jr. takes over the lead role from Michael Gambon as Dan Dark, author of dime store mystery novels. An extended stay at a hospital suffering from a severe skin disease has Dark losing touch with reality, alternating between painful episodes from his past to present dealings with his doctors to hallucinations about his written creations complete with musical numbers. There’s much to admire in this film, but little to love, or justify watching it when you could watch the superior miniseries. This plays like the abridged version.