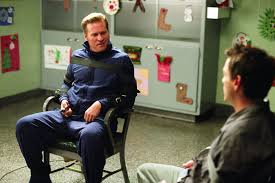 Private detective mysteries aren’t like Agatha Christie mysteries. The plot doesn’t need to be airtight. Roger Ebert argued that the plot doesn’t matter at all in his review of The Big Sleep, one of the best of its kind. He’s right to an extent, but I think the plot needs to feel like it matters at least for the course of the movie, or else there’s no suspense. Case in point, the very funny but mostly meaningless Kiss Kiss Bang Bang. Robert Downey Jr. is Harry Lockhart, a minor league thief that stumbles across an opportunity at acting in a Hollywood movie in a major role as a detective. This leads him to study Gay Perry (Kilmer), an actual detective, on a case that coincidentally involves Lockhart’s childhood sweetheart, Harmony (Monaghan). The film barely cares about its plot and instead becomes a series of comic setups based on other films of this subgenre. I don’t mind too much. Downey Jr., Kilmer, and Monaghan are excellent and there are several memorable scenes. I do think there was an opportunity to be more, but Kiss Kiss Bang Bang is a pretty cool, clever film as it is.