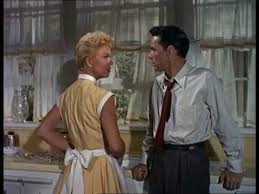 With their sister’s engagement, Laurie (Day) and Amy (Fraser) contemplate their own impending spinsterhood. Then a brash musician named Alex (Young) enters the picture, and both sisters fall for him. As if that weren’t complicated enough, Alex’s depressive friend and music partner, Barney Sloan (Sinatra), arrives, and Laurie can’t help but be drawn to him, despite his moods. Finely tuned melodrama in the mold of the Douglas Sirk movies which were popular around the same time, though not quite as effective. It is well-acted, particularly by Sinatra, and any time he or Doris Day break out in song, it’s a beautiful thing. The ending loses something by not following through on what it set up so well.