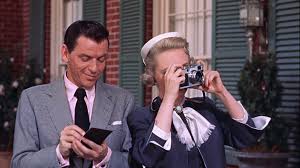 The Philadelphia Story (1940) is one of Hollywood’s most popular classics. I’ve never been really taken with it. On paper, it’s a glamorous romantic comedy starring Katherine Hepburn, Cary Grant, and James Stewart. You can’t beat that combination, and yet I have only ever been mildly interested in their tangled love triangle and have gone nearly a decade now without rewatching it. Perhaps it’s due for another viewing. To be fair, I was underwhelmed by The Awful Truth (1937) my first time watching it, but years later found it to be charming and marvelous, watching it several times since. Seeing High Society, a musical remake of The Philadelphia Story, starring Bing Crosby, Frank Sinatra, and Grace Kelly in lieu of the previously mentioned trio, however, hasn’t made me question my earlier judgment. High Society is entertaining, certainly, lovely to look at with its elegant technicolor visuals, but held back in the end by Grace Kelly’s character, if not her performance. It’s reminiscent to me of a much later picture, Four Weddings and a Funeral (1994), which too had everything going for it but couldn’t escape its disappointing leading lady. Like Andy MacDowell in that film, Grace Kelly is beautiful and alluring and we can definitely understand the men running after her, but she never proves herself to be truly worthy of any of the male characters’ affection. Is she supposed to be a “modern woman?” Independent, strong, and intelligent? Because to me, she’s the Daisy Buchanan character in F. Scott Fitzgerald’s The Great Gatsby published thirty years earlier except with a happy ending. Also like Andy MacDowell in Four Weddings and a Funeral, the charming male lead had a better option. Hugh Grant had Kristen Scott Thomas and Bing Crosby and Sinatra should be fighting over Celeste Holm here.

Kelly plays the wealthy socialite, Tracy Samantha Lord. On the eve of her wedding, where she’s to be married to a George Kitteridge (Lund), a nice enough man but bland of course, her ex-husband, C.K Dexter Haven (Crosby) shows up with eyes on sabotaging the engagement and reconciling with her. He still loves her, he admits. Later, two employees of a tabloid newspaper, reporter Mike Connor (Sinatra) and photographer Liz Imbrie (Holm), arrive to cover the event. Connor, initially convinced that he doesn’t like Tracy, soon falls for her and becomes Dexter’s rival in stealing her from George.

Bing Crosby is cool and as appealing as ever. Musical numbers between him and Sinatra and Louis Armstrong are the film’s real strength, as you’d imagine they would be. Armstrong narrates the film and backs Crosby up on one or two snappy numbers, but High Society, as fine as the supporting cast is and as impressive as all the auxiliary details are, is dependent on its stars. I don’t blame Kelly as much as I do the character. We’ve seen Grace Kelly in other films; magnificent films like: To Catch a Thief, Rear Window, Dial M for Murder, and Mogambo. She was magnificent in them, but in High Society, she’s asked from the beginning to be a spoiled brat for much of the movie, and though she’s humbled in the end, it doesn’t erase the fact that she was a brat for the majority of the “romantic” scenes. As a result, High Society really isn’t romantic at all (hence me putting romantic in quotation marks). That’s a huge limitation. As a romantic musical, High Society only delivers on the musical aspect, which is good enough to make it worth watching, but probably not more than once.