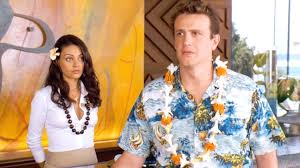 Crappy t.v composer Peter Bretter (Segel) is left by his perfect girlfriend, television star Sarah Marshall (Bell), for a bohemian rockstar, Aldous Snow (Brand). Wanting to get away from her and all things that remind him of her, Peter takes a vacation to beautiful Hawaii, but she turns out to be there as well. Dealing with that awkwardness, Peter meets several characters at the Hawaiian resort, one being the lovely receptionist, Rachel Jansen (Kunis). Segel is such an affable personality that we feel for him through each humiliation, and cheer for him in his moments of triumph. Paul Rudd, Jonah Hill, and Russell Brand (before the persona became stale) provide a lot of laughs in the supporting cast, and Forgetting Sarah Marshall is a rock-solid romantic comedy.