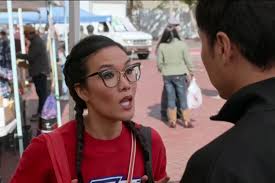 Girl meets boy. Girl loves boy. Boy blows it at some point. Girl gives him another chance, usually because of some terrific speech. Romantic comedies really haven’t evolved at all in cinema’s 100-plus year history, but they haven’t dipped in popularity at all either. People like their rom-coms one way and are perfectly fine to tread that oh-so-familiar territory an infinite amount of times.  There are few truly great movies in this genre over the past fifty years, but there are dozens of very good ones and even some mediocre films you watch on occasion precisely because they are undemanding.

Always Be My Maybe is Netflix’ newest original romantic comedy. Netflix has done a nice job for the genre over the past few years, and the one thing they really have going for them is their focus on representation and reaching all audiences. Always Be My Baby stars Ali Wong and Randall Park, two Asian-Americans, in the lead roles. We are still in a time when having Asian-American leads in something as light as this movie is tremendously significant, but you hope the film doesn’t rest on its cultural importance. On the one hand, outside of its fresh faces and perspective, Always Be My Maybe offers few surprises and doesn’t do anything to reinvigorate its well-worn trappings. On the other hand, I’ve already mentioned how those trappings never seem to get old, and this film is both funny and appealing. Plus it has a fantastic cameo from Keanu Reeves.

Wong plays Sasha, first appearing in the film as a neglected 12-year-old who befriends the boy next door, Marcus (Park’s character). They spend all of their time together, and Sasha feels closer to Marcus’ parents than her own. Fast forward a few years, Marcus’ mother dies, and, partly influenced by grief, but also partly inevitable, the two hook up. In the awkward moments afterward, Marcus blows it, and over a decade goes by without them seeing or speaking to one another. Pick up in present day, Sasha is an immensely successful chef opening new restaurants all over the country and on the verge of marrying the handsome and wealthy Brandon (Dae Kim). Marcus, however, still lives and works with his dad. He has a band that does well locally but is reluctant to branch out. The two reconnect when Sasha returns to San Francisco after breaking up with Brandon and her friend hires Marcus and his father to set up the air conditioning at her new home. Initially combative, it’s not long before Marcus realizes that he’s in love with her, but not before she’s swooped up by Keanu Reeves, playing himself, giving a very funny and self-deprecating performance.

Written by its leads, who have worked together on the fantastic sitcom Fresh Off the Boat (2015-), Wong as a writer and Park as the star, and directed by Nahnatchka Khan, that show’s creator, Always Be My Maybe never quite feels cinematic. Like other Netflix movies, this one feels more akin to old television movies than it does the Hollywood romantic comedies given big movie theater releases, and I do think it goes beyond its method of distribution. The actors are very good, the plot is predictable but compelling, the writing is funny, and yet there’s a slightly sitcommy and not cinematic quality about the proceedings that is hard to put my finger on. Perhaps it’s the simplicity of the shots. The majority of the film is a series of conversations and they are almost entirely made up of over the shoulder shots that are fine but uninspired and a little stiff at times.

I feel like I’ve seen every rom-com Hollywood has put out since its inception. I like watching something easy while I eat, and the assurance that the likable, attractive couple will turn out alright in the end. I like it even better when the couple is a little antagonistic towards each other for most of the movie like Sasha and Marcus are in this one. Films like this are as easy to condescend to as they are to watch, but, ultimately, my bottom line is that I’ll probably watch this one more than a few times. Among Netflix’s growing slate of films, Always Be My Maybe ranks with To All the Boys I’ve Loved Before as probably the two best.