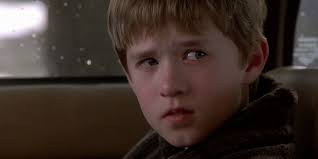 After a horrific episode with a former patient, child psychologist, Malcolm Crowe (Willis) seeks redemption in helping a young boy, Cole (Joel Osment) with dark secrets. Meanwhile, his work takes its toll on his marriage as he grows distant from his wife (Williams). Everything about this ghost story is perfectly calculated. The performances, from Willis to Collette to Joel Osment and down to Wahlberg are essential for this film to work. The twist ending, which you probably know by now, or should, works because it’s not necessary. The film would have been good without it, the final meeting between Malcolm and Cole supplied enough closure to leave the audience satisfied, so when the real ending hits, we’re shocked, and the movie becomes great.