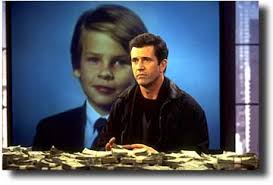 Ruthless, controversial businessman, Tom Mullen (Gibson) gets thrown into action once his son is kidnapped. The kidnapper, Jimmy Shaker (Sinise) is a cop, and knows all the angles, asking for 2 million in return for the boy. Mullen, against the wishes of his wife, and the advice of the FBI, turns the table on Shaker by refusing to pay and instead puts a bounty on the kidnapper’s head. Ransom is a riveting drama that might have benefited from sharper, more inspired direction or a less generic ending. The thrill of this film comes mainly from the high stakes chess match between Gibson and Sinise who both do great work here. Both men wrestle with their pride and practicality, and their collision was inevitable. I just feel this material deserved a darker, nastier conclusion. This wasn’t a happy ending type of film.