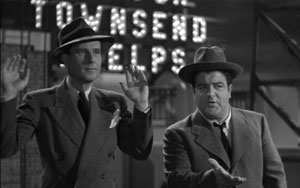 Abbott and Costello stumble their way into a whodunit murder mystery as they look to be promoted from soda jerks to mystery writers on a top radio program. Despite this being a comedy, all the traditional murder mystery rules apply: a single location, a host of suspects, red herrings, and the big reveal. Costello brings tremendous energy and comic relief to the proceedings, as Abbott shakes his head in exasperation. That plus the grim plot make for a winning combination. There’s also some early “Meta” humor with the pair mocking their own “Who’s on first” routine. Terrific entertainment.