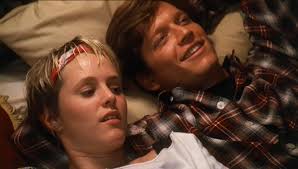 Some Kind of Wonderful feels like a more modest, less memorable Pretty in Pink. No Molly Ringwald, no Duckie, and no James Spader. However, it’s no less enjoyable and, in fact, has a better ending which was apparently John Hughes’ motivation for writing it in the first place. Eric Stoltz plays Keith Nelson, a hardworking, high school outsider from a middle-class background who’s started to wonder if he has a chance with Amanda Jones (Thompson), the most popular girl in school. His best friend, Watts (Masterson), secretly pines for him, but reluctantly agrees to help impress Amanda. Stoltz and Masterson are appealing and make the relatively light fare compelling.