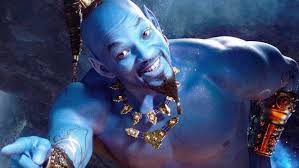 A charming street-rat, Aladdin (Massoud), meets the beautiful princess, Jasmine (Scott), and is inspired to improve his station in life. Given an opportunity by the scheming vizier, Jafar (Kenzari), Aladdin ends up with a priceless and magical lamp that contains an all-powerful genie (Smith). Granted three wishes by the genie, Aladdin becomes Prince Ali and a potential suitor for Jasmine. This film’s faults are built into it from conception. It’s a live-action remake of a classic animated Disney film and can never hope to equal, let alone better the original. Fortunately, aside from this limitation, and despite Disney’s apparent lack of originality, this version is engaging, brightly colored, and enjoyable. The two leads along with Will Smith make the familiar spectacle worth revisiting.