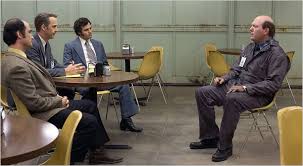 From the late 1960s and on into the ’70s, the notorious serial killer known as the Zodiac terrorized Northern California and taunted the authorities through a series of cryptic letters sent to the local newspapers. David Fincher’s expertly crafted and cast film focuses on a group of men involved in the investigation, alternating between multiple police departments and the San Francisco Chronicle. Jake Gyllenhaal plays Robert Graysmith whose book this film is based on, but this is a true ensemble piece. There are a large number of characters and the focus shifts constantly between them from scene to scene. This approach matched with the perfect casting and absorbing material makes Zodiac fascinating. If I have one quibble, it is Fincher’s insistence on using CGI for background details and shots. At times, it is distractingly artificial.