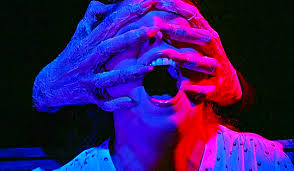 When Mark Elliot (McCloskey) goes looking for his beloved sister, Rose (Miracle), he finds a centuries-old supernatural mystery involving the Three Mothers (three evil sisters) instead. Director Argento is a master at visual storytelling. So skilled in fact that he’s able to build suspense without any discernible character development. The opening sequence, case in point. A woman we don’t know yet climbs in and out of the water multiple times and it’s incredibly tense, despite the fact that she means nothing to us at this point and we don’t have any idea what it is we’re supposed to be afraid of. Inferno, however, is not his strongest work. Visually striking, the overall film feels too episodic and lacking in any motivating force. The characters exist simply to die spectacularly and their threat’s not scary enough.