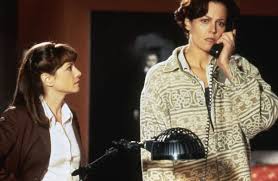 After a violent attack by a psychopath, Dr, Helen Hudson (Weaver) is traumatized and rendered agoraphobic, never leaving her state of the art apartment. A year later, a serial killer terrorizing San Francisco makes a point of involving Helen. She notices that the killer is copying a different infamous slaying with each murder, reluctantly teaming up with detectives Monahan (Hunter) and Goetz (Mulroney). The female leads give strong performances and the film’s biggest strength is their fully rounded characters. Apart from that, Copycat is by-the-numbers but well done. It’s an interesting premise that delivers; gripping and suspenseful.