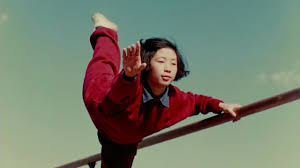 A cultural snapshot of Peking, now Beijing, in 1956 under Mao Zedong’s rule, though the whimsical tone and especially eloquent narration establish the film as an anthropological study rather than a political one. Many of the shots and images captured by the filmmakers are incredible. Candid shots of children passing, school in session, foggy mist covering the fields. Aided by Eastman color, the film looks stunning at every turn. If you’re interested in foreign cultures and different eras, you’ll find much to enjoy in this piece. Marker makes no statement as far as I can tell. This belongs more to the fly on the wall style of documentary filmmaking, though at times we see the filmmakers converse or engage with the natives on the screen. For those less interested in the subject, such as myself, you’ll find yourself, drifting off.