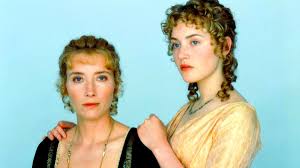 The death of Henry Dashwood (Wilkinson) and selfishness of his son, John, his heir, leaves his widow and three daughters, prudent Elinor (Thompson), emotional Marianne (Winslet), and the much younger Margaret in dire straits. Fortunately, a cousin, Sir John Middleton takes them in, offering them a cottage, and the two older sisters’ romantic lives play out in that grand Jane Austen style that’s as popular now as it was when the novel was first published over 200 years ago. Emma Thompson wrote this adaptation herself, doing a sterling job all-around. Her Elinor is a worthy and endearing heroine. Winslet’s Marianne is a bit of a brat for much of the film, but the actress fleshes her out so that we recognize it as a symptom of being young and foolish and not an eternal character flaw. Her eventual humbling and subsequent redemption is nearly as satisfying as Elinor’s soulmate finally coming through-at the last minute, of course. Masterfully done by the director, Ang Lee, thought to be an odd choice for the job at the time. Excellent supporting performances. Robert Hardy and Elizabeth Spriggs as the meddling, but lovable cousins, Sir John Middleton, and Mrs. Jennings are especially funny.