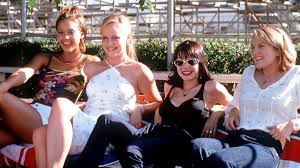 In the vein of superior ’90s teen comedy, Clueless, Never Been Kissed is a sweet, romantic, over-the-top comedy. It stars the always endearing Drew Barrymore as Josie Geller, a marginalized copy editor at the Chicago Sun-Times, hoping for her chance to be a reporter. It comes when she’s given an undercover job pretending to be a high school student to fish out a story. As high school was a nightmare last go around, Josie, who’s never had a boyfriend, is not real keen on the assignment. It’s all fine and mostly amusing if you’re in the mood for a light diversion, but it’s pretty forgettable even with its cast of up-and-comers.