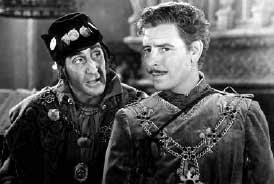 Anybody can relate to being dissatisfied with their country’s leadership. How many people believe, or at least boast that they could do better if given the chance? Not surprisingly, this feeling extends long before present-day issues, and, in a forgotten classic, If I Were King, we glimpse 15th century France, alternating at times between the much-maligned King Louis XI (played by Basil Rathbone) and the rebel rousing, street poet Francois Villon (played by Ronald Coleman). Never mind that the French historical figures are portrayed here by British thespians, and many supporting players are played by Americans. As a typical style in Hollywood films, I quickly looked past this oddity and was gripped by this exciting swashbuckler, and moved by the two leads’ excellent performances.  This is an exceptional film.

The King and his people have been pushed to holing up in Paris, besieged by the formidable Burgundians, and reduced to scraps for food. Well, actually it’s the common people who go hungry, while the King and his court eat rations of the finest food. On the streets, Francois Villon spouts poetry to the pretty girls and leads raids on the King’s supply of food, narrowly escaping capture. Meanwhile, in his castle, the King detects a spy in his midst and sets a trap to catch the rat. This leads him to a dingy tavern in disguise where he hears the popular Villon drunkenly bragging of what he would do if he were king while insulting the current leader. Naturally, King Louis makes plans to punish the man later, but fate intercedes. He discovers the identity of the spy in his quarters, and it turns out to be his Grand Constable, the man in charge of his military. When the Grand Constable attacks Villon upon recognizing him as a wanted thief, Villon kills him and unknowingly does the King a favor. In return, King Louis, more out of jest than true gratitude, names Villon as the new Grand Constable for one week, and so, Villon gets the chance to make good on his boasts, not knowing that the King plans on executing him at the end of the week.

Basil Rathbone, aside from his long string of Sherlock Holmes movies, is best remembered for playing suave villains who ultimately lose to the protagonist in a duel (The Mark of Zorro, The Court Jester, Adventures of Robin Hood, Captain Blood).  He was great in those roles. Here, he plays a dramatically different character in the historical personage of Louis XI. He makes the unpopular figure a complex, anti-hero of sorts. He’s intelligent, back-handed, greedy, surprising, but not cruel. Rathbone is almost unrecognizable in the role.

Ronald Coleman, unfortunately not as big of a star today as some of his peers was a fantastic actor with some truly great films. While If I Were King may not be on the same lofty level as another of his films, Prisoner of Zenda, it represents another example of his greatness. He, too, could be described as an anti-hero. He’s a thief, a womanizer, a common criminal, but given the chance, he proves himself to be a hero, saving his city and its people.

A key aspect of any great adventure film is a compelling romance, and If I Were King provides in this as well. Villon falls for the lady-in-waiting, Katherine (Dee), letting her think he’s a high born noble. She eventually falls for the courageous and compassionate man he is, and not the strutting nobleman he pretends to be, and we leave the film giddy from a film that delivered in rich character, sweeping adventure and intrigue, and literate, well-developed romance.