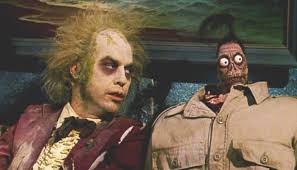 A straight-laced, small-town couple, Barbara and Adam Maitland (Davis and Baldwin), die suddenly and randomly one idle day, and find their afterlife is an indefinite amount of time stuck in their house, now occupied by a family from the city. Wanting to get rid of the newcomers, Barbara and Adam get mixed up with a shady character named Betelgeuse (played hilariously by Keaton) as they do what they can to scare the family out of the house. Several odd, surprising, wonderful moments (the impromptu “Banana Boat Song” scene is a classic) all built around terrific characters. Great small supporting turns from Sylvia Sidney, Glen Shadix, and Robert Goulet and the claymation, as opposed to most special effects, gets more charming with age.