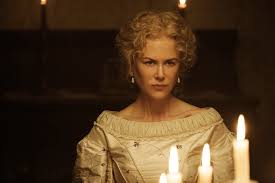 Remake of a 1971 Don Siegel picture starring Clint Eastwood, Colin Farrell takes over the role of John McBurney, a union soldier lost and wounded in Confederate woods. Eventually, he is found and taken in by Martha Farnsworth’s (Kidman) school for girls, where he quickly tries to gain the upper hand by manipulating and seducing the lonely women. The original dealt with no subtlety whatsoever, and I thought that suited the material. Coppola’s version is beautiful, restrained, and, as a result, dulled. The actors are all fine, the sets and superficial details magnificent, but I preferred the gothic potboiler quality of the original film and Clint Eastwood’s enormous persona in the role of McBurney.