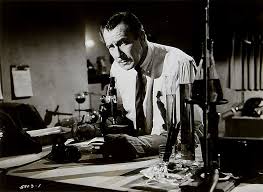 Two murderous plots are afoot in the small, seemingly sleepy town that mystery writer, Cornelia van Gorder (Moorehead), spends her summers in, and both appear to revolve around a fortune in money missing from the local bank. Vincent Price plays a doctor and the only one who knows exactly where the money’s hidden (since he killed the man who stole it). Then there’s a figure being called “the bat,” terrorizing the town with a string of murders. It all blends together rather simply and the main whodunnit plot is obvious in my opinion, but The Bat is entertaining. The confined setting and cast of older female leads are terrific.