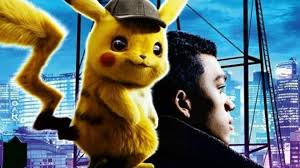 Tim Goodman (Smith) lives a quiet, dull existence as an insurance salesman in a world where millions of Pokémon roam. After the death of his police detective father, Tim travels to Ryme City for some closure, but stumbles into a conspiracy and meets his father’s Pokémon partner, Pikachu (voiced by Reynolds). The two find that they can understand each other, and reluctantly team up to get to the bottom of what happened to Tim’s father. The first thing going for this film, surprisingly the first live-action adaptation of the Pokémon franchise, is the first-rate design of its fantastic creatures. Pikachu is wonderfully brought to life. Consider what we’ve seen of Sonic in his upcoming film, and rejoice at the work of these animators. Ryan Reynolds brings a joke-a-second energy to the role and though only a small percentage of them land in my view, it keeps the proceedings fun. The plot isn’t as grand or deep as the best mystery films, and its solutions are easy and obvious, but I love noir and the premise is good enough and executed well enough to make Detective Pikachu worthy entertainment.