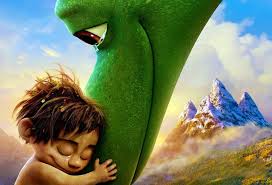 In an alternate history, where the dinosaurs weren’t wiped out by a meteor, a young Apatosaurus named Arlo, with a fear of seemingly everything, gets whisked away from his family after chasing a young human child. The two eventually become close over the course of their journey to return home. For Pixar, the groundbreaking 3D animation studio that is constantly innovating, this effort, The Good Dinosaur is so substandard. True, their standard is so much higher than their competition, and perhaps because of this, I’m being unfair to what is a decent enough picture. For large stretches though, I was bored, and there was never a point where I was excited. A handful of nice ideas and typically stellar animation (though the character designs aren’t satisfying) make The Good Dinosaur watchable. Ice Age dealt with a similar premise and is more appealing.