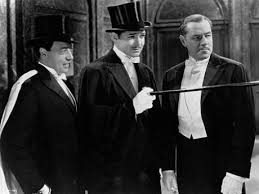 A midwestern girl and pastor’s daughter (MacDonald) moves to the raucous urban sprawl of 1906 San Francisco. There, she falls for the roguish club owner Blackie Norton (Gable) while being pursued by the more reliable and wealthy Jack Burley. Special effects and melodrama. An early example that I believe set the template for later classics such as Titanic. The climactic earthquake sequences are remarkable. While the surrounding drama is at times heavy-handed and somewhat hackneyed (perhaps due to age), Gable gives his strong performance as the selfish man changed by love. Tracy is excellent in essentially a supporting role (although he was nominated for the Oscar in the lead category). MacDonald is lovely as the fish out of water songstress and rising star.