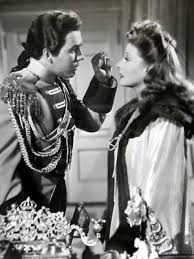 Tallulah Bankhead plays Catherine the Great, the titanic figure of Russian and World History, here, already established as Empress, and with a reputation for seducing many of her male subjects. A military officer, Chernoff (Eythe), discovers a plot to overthrow Catherine, and rushes to warn her. She’s already aware of the plot but decides to make Chernoff her next conquest. Meanwhile, unscrupulous but loyal Chancellor Nicolai (Coburn), does everything he can to destroy Catherine’s enemies. The whole thing is played for laughs, originally meant for the great Ernst Lubitsch who fell ill during the production. The film, no doubt, lost a great deal in the switch from Lubitsch, with his legendary “Lubitsch touch” when it comes to comedy, to Preminger, who’s a great director in his own right but worked almost exclusively in drama. Still, A Royal Scandal is handsomely made and terrifically performed, especially by Coburn and Bankhead (her own reputation mirroring Catherine’s).