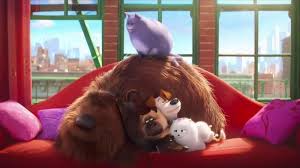 Beloved, spoiled dog Max (C.K) has a rude awakening when his owner brings home, Duke (Stonestreet), a monstrous dog that he’s asked to see as his brother. The two don’t get along, and this leads to them being lost in New York City for a crazy ninety-minute adventure. The creative staff at animation studio, Illumination, certainly don’t over-exert themselves. On the positive side, they consistently deliver movies that are generally pleasing with enough jokes to pass the time and a whole lot of mass appeal. On the other hand, they’re not aspiring for much. The voice work is super solid. The animation is bright and appealing. There’s just nothing special about this movie. Plus, it’s a blatant ripoff of the first Toy Story.