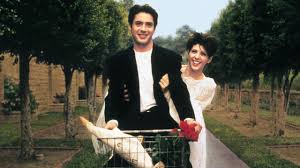 After an encounter with a fortune teller as a child, Faith (Tomei) is convinced that she’s destined to marry a “Damon Bradley,” but she’s 25 years old and ready to settle on a nice, stable podiatrist not named Damon Bradley. Ten days before her wedding, she gets a phone call from a man bearing the foretold name and heads to Europe with her sister-in-law, Kate (Hunt), to track him down. Robert Downey Jr. plays a man she meets in Italy who may or not be Damon Bradley but is definitely in love with her. Attempting the kind of manic charm of one of his previous successes (Moonstruck), Norman Jewison fashions an appealing, easy entertainment with beautiful locations and attractive stars.