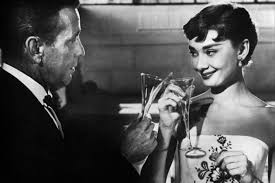 Updating the Cinderella story, chauffeur’s daughter, Sabrina (Hepburn) dreams of spending her life with David Larrabee (Holden)- the womanizing son in the family her father works for-but he never notices her. Sent to Paris to learn how to cook, and to forget about David, she returns years later as a beautiful woman and soon finds him infatuated with her. David’s older brother, Linus (Bogart), a workaholic and ruthless businessman, sees Sabrina as a hitch in his grand plan for a merger, and sets about getting rid of her, though he ends up falling for her. Wonderfully romantic, old-fashioned, and timeless thanks to the actors. It’s a fairly simple story but told so well by a great filmmaker working with great movie stars.