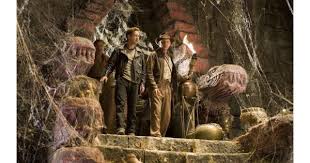 Twenty years since finding the Holy Grail in The Last Crusade, Indiana Jones returns in The Kingdom of the Crystal Skull, older, but otherwise much the same. It’s 1957 and he’s mixed up with Soviet agents, desperately searching for the secrets behind a mummified corpse left after a UFO crash. Indy teams up with a brash young greaser, Mutt (LaBeouf), to save the latter’s mom, Marion Ravenwood (Allen), and track down Professor Harold Oxley (Hurt) who seems to have lost his sanity. Bits and pieces of this film really work, mainly those copy and pasted from the original three’s formula: the score, Indiana Jones, himself. Other elements fall flat. The use of CGI is crudely done and unsatisfying. Overall, Kingdom of the Crystal Skull entertains without dazzling, falling well short of the original films in the series.