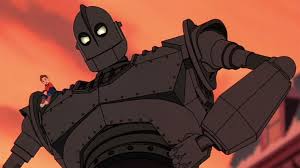 “You are who you choose to be,” Hogarth tells the iron giant. It’s a strong message and theme of this film as Hogarth (Marienthal), a young adventurous boy, living through the Cold War in 1957 Maine, stumbles upon an otherworldly being made of iron that consumes metal. Oddly enough, the “iron giant” comes in peace, and Hogarth sets about hiding him from the small town’s citizens and the sinister Kent Mansley (McDonald), a government agent sent to investigate some strange happenings. Hogarth gains the help of the town’s scrap metal artist and beatnik Dean (Connick Jr.), but how long can they hide a fifty-foot metal man? The animation, the voice acting, the writing are first-rate, and the central idea that you can rise above your nature, or that you’re defined by what you do and not how you look, are mature and weighty themes.