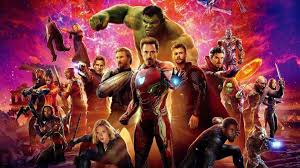 Some spoilers ahead! I’ve considered several different options of reviewing this juggernaut of a film (what will likely be the biggest movie of a stacked year). I didn’t see any way of completely avoiding spoilers since I am most certainly in the minority with my opinion being that, like all Marvel films before it, Avengers: End Game is a decent, but ultimately disappointing film. In order to defend my position, I’d like to be specific occasionally. The truth is that a great number of people will love End Game. I can already hear the incoming choruses of “Avengers: End Game is the greatest movie of all-time,” made up of guys who think black and white films are boring. I respect the level of skill and talent that goes into a production of this sort while feeling alone in noticing how slick, safe, and unsubstantial all Marvel films are. Is it a bad movie? No. It’s a good movie. In fact, the entire first half of the film is incredible; special. Which is why I was so disappointed by the second half treading unsurprising, familiar turf. The great first half was just a tool to get to a fist fight between Iron Man and Thanos. That’s probably what most people want. I was bored.

End Game begins like a dystopian epic, with a fantastic opening involving Clint Barton/ Hawkeye (Renner) and his family, then moves to Downey Jr. as Tony Stark wandering into space, alone, searching for answers. The other remaining Avengers are all coping in their own way. Steve Rogers/ Captain America (Evans) seems to be the only one that maintains any degree of optimism. Though reeling, they band together to find and take down Thanos, this time aided by the supremely confident Captain Marvel (Larson), but not before they take back the Infinity stones and reverse Thanos’ massacre of 50% of Earth’s population. The Avengers confront Thanos very early in End Game, and, to be honest, at that point, I’m a bit thrown, unsure of what the movie’s up to. That surprise doesn’t compare to what happens when the scene ends, and, for the first time watching a Marvel film, I don’t know where it’s going and I’m excited. Cut to five years later, and I’m thinking this could be Marvel’s first exceptional picture. But…

At some point, Scott Lang (Rudd) shows up and he’s the one with the brilliant idea about time travel? How? He’s a thief. The writers do a decent job of deflecting from this absurdity by giving him some humorous lines and references to Back to the Future and Timecop. In any case, after this point, the film stops surprising. Everything I thought would happen before entering the theater, I was now sure would happen, and later proven correct. The third act, where every Marvel film loses steam, is where Avengers: End Game becomes predictable, loud, and uninteresting. Compare it to the quiet, dramatic, anything-can-happen atmosphere of the first hour or so, and tell me it’s not disappointing.

I give the filmmakers credit for weaving together an intricate plot and a large number of character arcs perfectly. I get it. That’s hard to do. End Game does so tremendously. But at the end of the day, it’s a bunch of people who can’t really die hitting CGI monsters for an extended period of time. The payoff is the least exciting moment in the movie.