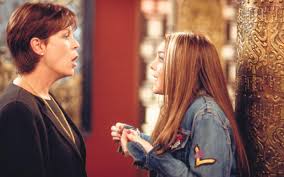 Another remake of a Disney classic starring Lindsay Lohan (after The Parent Trap), Freaky Friday teams her with Jamie Lee Curtis, playing her mother, as the two just can’t seem to see eye to eye. A bit of magic done at a Chinese restaurant has the two waking up in the other’s body. The two stars handle the trick nicely-Lohan as a middle-aged mom and Curtis as an emotional teenage girl-and the screenplay manages a degree of drama and sentimentality that moves it beyond a one-joke movie. Freaky Friday is a good, funny, entertaining film.

One thought on “Freaky Friday (2003, Directed by Mark Waters) English 6”