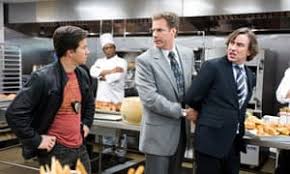 Detective Danson (Johnson) and Detective Highsmith (Jackson) are the coolest cops on the force. After their deaths, who’s left to replace them? Detective Hoitz (Wahlberg) would love for it to be him, but he’s notorious for having shot Derek Jeter, and his partner, Gamble (Ferrell), is content to sit behind a desk all day. Their opportunity comes, however, when a seemingly boring permit violation turns into a major international case. Cop films are pretty much always ridiculous. The Other Guys knows this and has fun with it. I can’t say that I fully understood the plot or the apparent political implications suggested by the ending credits, but there’s a joke every second and most of them land, my favorites being Ferrell as a pimp named Gator, Keaton splitting time between being the police chief and a manager at Bed, Bath, and Beyond, and Wahlberg talking a man down from the ledge.