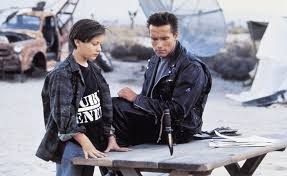 It’s hard to remember, or even imagine, what it was like to watch Terminator 2 for the first time and find out thirty or so minutes in that Arnold is a good guy this time around. He returns to the year 1991, sent by the all-important John Connor, to protect the younger version of John, played by Edward Furlong. Also sent back in time is the terrifying T-1000 (Patrick), a new model of Terminator, seemingly indestructible, directed to kill John. Terminator 2 is a masterful combination of stunts and practical effects mixed in with, at the time, cutting-edge CGI. The action sequences are still very effective. There’s not much that can be said to be thoughtful or meaningful in this film. It’s a solid high-concept action flick.