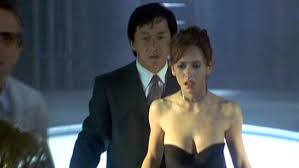 Dwarfing the great Jackie Chan with silly special effects is a horribly misguided idea. Instead of watching real stunts, spectacular choreography, or funny pratt falls, The Tuxedo lets the CGI team take over. Chan stars as Jimmy Tong, a driver who’s hired to be the chauffeur for a mysterious Mr. Devlin (Isaacs). Mr. Devlin turns out to be a spy, and, after an assasssination attempt leaves him incapacitated, Tong assumes his identity to get revenge. As misguided as taking the action out of Chan’s hands, The Tuxedo also makes Jennifer Love Hewett a naggy, sarcastic sidekick. The film as a whole is painless enough, but devoid of any real laughs or good action sequences, and is extremely silly quite frequently.