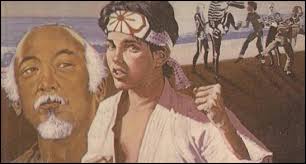 A New Jersey boy named Daniel (Macchio) moves to California with his single mother and immediately runs into a gang of bullies. They torment him ceaselessly until the Okinawan maintenance man, Mr. Miyagi (Morita), stands up for him, and offers to teach him karate, in preparation for a massive tournament at the end of the year. Your standard sports film in many ways, The Karate Kid gets over the top by being better than the rest. The relationship and friendship between Daniel and Mr. Miyagi is the heart of the film, and I enjoy the corny ’80s trappings and teen romance.