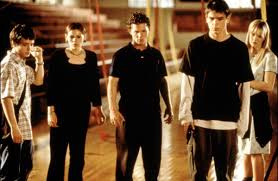 What Scream was to slasher films, The Faculty hoped to be to sci-fi horror classics like The Thing and Invasion of the Body Snatchers, with its cast of teen stars and a surplus of pop culture references. Written by the same scribe, Kevin Williamson, and directed by a young Robert Rodriguez, the result is an often ridiculous, always a blast film, with a fantastic cast and a handful of bad special effects. Elijah Wood stars as a nerdy student at Harrington High, Casey, who first discovers the weird happenings afoot, hiding in a closet next to mean girl, Delilah (Brewster). An alien race is not so slowly taking over the bodies of Harrington High’s faculty and they’re coming for the students next. Of course, no one believes them, except for jock, Stan (Hatosy), outcast, Stokley (DuVall), bad boy, Zeke (Hartnett), and the new girl, Marybeth (Harris). Rodriguez isn’t what I would call a master of suspense, and The Faculty isn’t very scary at all, but he knows how to entertain, and The Faculty is one of his most entertaining films.