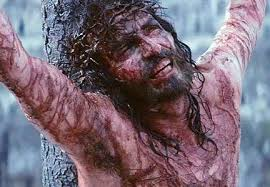 The heart of the Passion of the Christ is expressed in what amounts to one long extended scene, beginning with Christ’s flogging and concluding with a soldier piercing his side. This scene demands contemplation.  What does it say about the nature of man? How could something this violent be just another film? Why was this movie ever made? The Passion’s director, Mel Gibson, certainly wasn’t attempting to entertain. He had to know that this picture wasn’t uplifting in any commercial sense. Many Christians and Atheists alike left feeling uncomfortable, but Gibson staked his career and reputation on this film because he believed in its message, which just happened to be heavily steeped in violence. Gibson says, “This is a movie about love, hope, faith, and forgiveness. He [Jesus] died for all mankind, suffered for all of us. It’s time to get back to that basic message. The world has gone nuts. We could all use a little more love, faith, hope, and forgiveness.” He demonstrates, by sight and sound, every detail of Christ’s torture to engage the audience; to provoke; to prostrate; to allow an appreciation of the pain, the passion, and ultimately the triumph of this figure. The result is awe-inspiring, as a religious movie should be, transcending medium and tradition. When, in this scene, Christ is flogged and later nailed to the cross, the audience feels that they are enduring the abuse as well. The late great Roger Ebert remembers the days of his Catholic upbringing when he was forced to meditate on Christ’s suffering. He recalls, “For we altar boys, this was not necessarily a deep spiritual experience. Christ suffered, Christ died, Christ rose again, we were redeemed, and let’s hope we can get home in time to watch the Illinois basketball game on TV. What Gibson has provided for me, for the first time in my life, is a visceral idea of what the Passion consisted of.” In terms of story, The Passion is told by Gibson in a straightforward manner not distracted by secondary components or ashamed of the violence it displays in abundance. Room for thought, discussion, and edification can be found but the popular response seemed to be dismissing it as too violent. Search on RottenTomatoes.com to find the shallow but fashionable critical consensus at the time of its release to be, “The graphic details of Jesus’ torture make the movie tough to sit through and obscure whatever message it is trying to convey.” One critic, Jonathon Rosenbaum, criticized the movie in lamenting, “If I were a Christian, I’d be appalled to have this primitive and pornographic bloodbath presume to speak for me.” Not liking the film is understandable, but not going beyond too violent is a cop out similar to laughing in an awkward situation, not because anything is funny, but because it allows you to distance yourself from the matter. Gibson employs violence not because anyone enjoys it, but because the blood is absolutely necessary.

I, too, was shocked upon first seeing the graphic telling of Christ’s death. I watched for the first time this harrowing picture, and I remember distinctly the part with Jesus’ flesh being yanked from his bones. My initial reaction would be akin to that of most people after viewing The Passion, asking myself why in relating a story about love does Gibson ask his audience to suffer? I have seen the film a couple of times since, and my confusion has matured into admiration. I gladly defend the intention and means in which The Passion was made, feeling the full effects of Gibson’s raw storytelling with each subsequent inspection. I have embraced all the elements poured into this feature converging into something sublime, without ever understanding the word sublime. My recent viewing has spawned even more affinity, as I noted some of the smaller touches enhancing the experience. The disorienting but effective camera angles, the gorgeous cinematography, or even something I read about Gibson filming his hands as the ones to nail Christ to the cross. “It was me that put Him on the cross. It was my sins [that put Jesus there],” Gibson confesses, clarifying a cinematic choice that I believe is entirely beautiful.

There are two types of violence in film: violent films which incite our passions and violent films which force us to reflect on the meaning of violence and sacrifice. Both modes of expressions are valid but unfortunately, I believe not enough violent films allow for real thought. Most fall into the former half of the dichotomy. Some violent films even have the audacity to pretend to be thoughtful while seeking to collect strong box office receipts. General audiences do not want to think about a movie and are satisfied with violence for the sake of violence. Movie studios and directors have no problem providing the audience with these types of flicks, because, after all, the movie business is a business.

Mel Gibson’s The Passion of the Christ breaks away from studio norms and expectations, becoming a rare violent film that does allow for thinking. When people complain about The Passion being the most violent film ever made they cannot mean that it is the bloodiest, although it has plenty of blood. They cannot mean that this movie has the highest death count, because obviously it doesn’t, nor is it the only depiction of torture. So what people really mean is that for two hours Gibson exposes his audience to some of the most real, and unrelenting film violence ever, to the point where we are forced to grasp the violence. That distinction reflects no small achievement on Gibson’s part. The Passion of the Christ’s achievement is staggering.