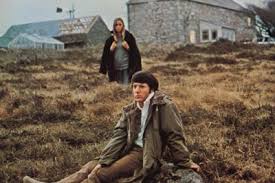 Sam Peckinpah-director of such great films as The Wild Bunch (1969), Ride the High Country (1962), and Bring Me the Head of Alfredo Garcia (1974)-didn’t care about things most other filmmakers care about. Never very interested in character development, never bothering with subtlety, his films are primal. Supporting characters are paper thin. Plot is undemanding. Dialogue is filler. All that is generally associated with depth, in his films, is reduced to white noise. He makes his point with the superficial. The remarkable thing then is that he is still to this day recognized as amongst the most provocative and controversial filmmakers of all time. He doesn’t have a movie in his filmography that holds a universal opinion or that’s interpreted in the same way by all. The favored way of analyzing a Peckinpah film, judging by reviews and articles, is to head straight for film theory. None of his films can be considered dramatic character pieces in any traditional sense, but to dismiss them as insubstantial or simplistic is, in film circles, to go the way of the philistine.

In 1971, he released his most inscrutable and polarizing film, Straw Dogs, starring Dustin Hoffman. Hoffman plays an American academic, David Sumner, who resettles in his English wife’s hometown only to find the locals hostile and the outcome violent. On the surface, the story portrays Hoffman, a civilized male, and Susan George, his supermodel of a wife, under attack. Their lives, their house, their marriage, and their happiness are all under attack, because his prosperity and her beauty stand out amongst the local mundanity, and make them targets. Eventually, they are both besieged. First, she is raped, and then, his home is invaded.

The setting in a Peckinpah film is always crucial with the depraved west being his most common choice of location. In Straw Dogs, a picture that thematically and stylistically encompasses ideas the director explored throughout his work, Peckinpah sets his story in small-town England; in a village masked in fog and moors. The main thing here is that it’s unfamiliar; specifically, unfamiliar to the protagonist. Hoffman’s character is anomalous in his new residence. We don’t get a good look at anyone else’s home, but we know they’re not living as well as he is. Peckinpah also liked to work with stars, and instead of lengthy character development, he used precise casting; typage. Hoffman is a short man. At 5″5, he is towered over by the supporting male characters. Their threat to him is immediately rendered physically by their mere presence. The implication that he cannot protect his home or his wife, the film’s most evident theme, is clear.

Straw Dogs’ narrative is brutal, and watching it unfold, is trying, but,  I believe what bothers viewers more, and what established the film’s controversial status, more than just the savagery on display, are the thorny questions underlying the action. There has been much written about Straw Dogs, various takes on the material, but no one can completely pin down what the film is meant to say. What is Peckinpah’s point? Even the leading actor’s opinion, that the character David Sumner was subconsciously provoking the violent conclusion-a valid and interesting take-was repudiated by the director. Much of the disparate opinions and controversy derives from the notorious rape scene itself involving Mrs. Sumner. Most of Peckinpah’s films depict violence and violence towards women, but never more uncomfortably than here, where the female victim is raped by an ex-boyfriend, and though a convincingly violent experience, appears to enjoy it. After the ex is through, she is raped a second time by his friend. Meanwhile, the scene is intercut with her husband wandering haplessly through the woods, holding a shotgun, looking useless. The next scene shows her crying in their bedroom while her husband walks around the room clueless.

The film’s climax revolves around their house being broken into, which is why Straw Dogs is considered a home invasion film. Hoffman gives refuge to a mentally retarded man who a group of local brutes-including the two rapists-desperately want hanging from a rope. They storm Hoffman’s house on the hill, and the calm, impotent milquetoast of a man he was at the outset of the film suddenly becomes a savage vigilante. He kills them all in true to Peckinpah fashion-blowing legs off, pushing a man’s neck to broken glass, decapitating a man with a bear trap. In the process, he slaps his hysteric wife around a bit and grows more violent than any of the men invading, who, in an easier film, would be clear cut villains. The home invaders are guilty of murder and two are rapists, but their reason for wanting the mentally retarded man? He murdered a girl who was one of their group’s daughter; one of their group’s sister. All the violence and guilt seems to run in circles and all the men are culpable, which is, ultimately, my view of the film’s themes. Straw Dogs was decried as a misogynistic fantasy, but I see a film where the two main female characters are the only sympathetic ones, and the men are complicit in violence towards these women. Critics point to the skimpy clothes Susan George wears as Mrs. Sumner. An early shot shows her walking out in public very conspicuously not wearing a bra. To me, her appearance and how it influences her attack critiques how certain women aren’t protected. Both Mrs. Sumner and the teenage girl who is murdered are, I guess you could say, coquettish women, and that factors into their victimization. I don’t think Peckinpah depicting how this happens means he’s defending it.

My last note in attempting to tie my thoughts about the film together is that Hoffman’s character clearly takes too much for granted. He fails to notice his wife and fails to notice his prosperity, which culminates in him being reduced to the surrounding barbarism. The film ends with him driving the mentally retarded man aimlessly, with the man saying, “I don’t know my way home,” and Hoffman replying, “That’s okay. I don’t either.”