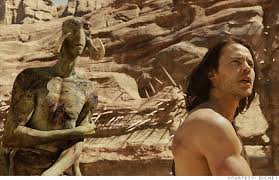 John Carter of Mars is a big, spectacular disappointment, and with its grade-A pedigree, it’s difficult to put my finger on what exactly doesn’t work. Taylor Kitsch stars as the eponymous lead, a destitute soldier from Virginia searching for gold in the Arizona Territory. He finds himself transported to Mars instead. There, he’s enslaved by the green Martian Tharks led by Tars Tarkas (Dafoe). Meanwhile, a struggle between two cities, Helium and Zodanga has waged for a thousand years. Eventually, John gets involved in the war and with the beautiful princess of Helium, Dejah Thoris (Collins). I’ve simplified the plot considerably in my summary, because the actual plot is dense and much too convoluted for a pulpy action-adventure flick. I suppose that’s John Carter’s biggest problem; hazy motivation and its intricate plot that includes an elaborate frame-story (why the characters do what they do is either unclear or unconvincing). Kitsch suffers from a lack of strong characterization. Whereas someone like Clint Eastwood can be compelling without many lines and no character development, Kitsch gets swallowed up by the special effects and odd sights. There’s also very little humor to be found.