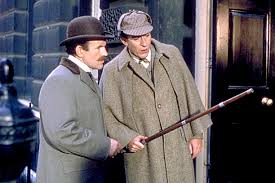 Years after his death, the letters of Dr. John H. Watson, one of literature’s most famous narrators and chronicler of the eminent Sherlock Holmes are found. In them, he relates a Sherlock Holmes story theretofore untold, deemed too private for the public. In Sherlock’s most personal case of his career, a strange and beautiful woman with amnesia winds up on his doorstep. Deducing that she’s looking for a missing husband, Sherlock sets out to solve the mystery, all the while falling for the woman. This is a later work from Billy Wilder, and probably his last great film. It’s beautifully, lavishly constructed sets, wit, and style belie the poignant sadness at its core which makes it a special take on the character. A late sequence featuring a Morse code message by way of an umbrella is an indelible, agonizing image.