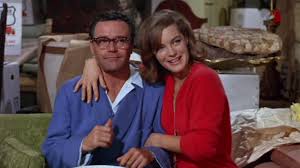 Oddball, madcap comedy about a working class schmoe (nobody plays a schmoe better than Lemmon) who gets roped into masquerading as the husband of his wife’s best friend (played by Schneider). The reason: 15 million dollars. Romy Schneider’s character is set to inherit big from her uncle, as long as she remains married; Her uncle is kind of a prude. Other family members, naturally upset to be kept out of that money look for any reason for her to be disqualified. It’s absurd material, and the actors and director know it. They play it for laughs and originality, and the director, a Disney animator formerly, does a good job with it. Romy Schneider is wonderful, Jack Lemmon is Jack Lemmon, Dorothy Provine is great as his supportive wife, and it’s always nice to see Edward G. Robinson, even if he’s only in it for five minutes. Does run a bit long, however.