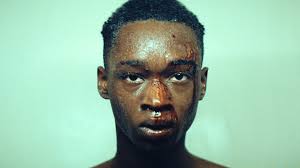 3 acts. Three different stages of Chiron’s life as he grows from a scrawny child, running around in Miami, to an outwardly tough drug dealer trapping in Atlanta. We meet the people in his life: the kind drug-dealer (movingly played by Ali who won an Oscar), his crack-addicted mother (Harris), and his best friend Kevin, who he harbors deep feelings for, and who ultimately helps him come to terms with being gay, and with being himself in general. The film does three very difficult things: it follows the emotional journey of a single character as they approach self-discovery. That theme or subject is prime pretentious territory, but Moonlight pulls it off by being sincere. Secondly, it uses a number of amateur or relatively new actors and gets excellent performances from top to bottom. Thirdly, its climax, if it can be said to have one, is of an extended, slightly awkward conversation between two men. Not exactly what would usually qualify as exciting, but it happens to be perfect, and brings the Best Picture winner to a poignant finish.