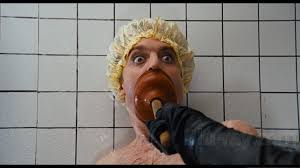 A nobody composer, Winslow Leach (Williams), has his work, what was to be his magnum opus, stolen by a ruthless record producer who runs a night club called the Paradise. A heinous plot against Winslow leads to disfigurement, and so he stalks The Paradise looking to exact his revenge. There are touches of Faustus and The Picture of Dorian Gray in addition to the obvious Phantom of the Opera inspiration in this movie, and what a trip it all is. The Phantom of the Paradise is completely nuts. The eye-popping colors, Brian De Palma’s technical wizardry, the excess. It’s incredibly silly at times, but often clever and satirical. “Beef” will forever live on in my mind, but you’d have to see the film to know what I mean. Hilarious and the music is fantastic. Easily my favorite adaptation of Phantom of the Opera.