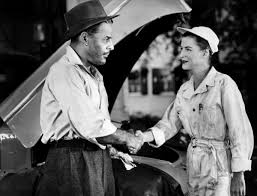 The victim of a scheming wife, Irene (Walker), and her lover, millionaire businessman, Walter Williams (Donlevy), stumbles into smalltown Larkspur, Idaho battered and bruised. He knows that his wife set him up to be murdered by her boyfriend and that the latter died in the attempt. He also knows, from the newspapers, that everyone assumes him dead, and he’s essentially free to start over. He becomes a mechanic in a local garage run by the beautiful and saintly Marsha Peters (Raines). This is a very simple story written and performed well, with the final act being so involving that I paused the film several times in anger, hoping to settle down. Charles Coburn is one of the best character actors, and he has a compelling role as the detective trying to get to the bottom of everything.