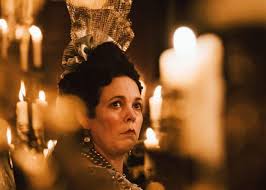 Playing fast and loose with history, The Favourite begins with young Abigail (Stone), a seemingly kind, unassuming daughter of a gambler, joining the staff of Queen Anne (Colman) in 18th century England. Abigail is the cousin of Queen Anne’s closest advisor, Sarah Churchill (Weisz), and slowly works her to becoming the lady’s confidant, but Sarah Churchill turns out to be more than just an advisor to Queen Anne, and Abigail is much more ruthless than at first she appears. Like my previous experiences with Yorgos Lanthimos’ films, I find The Favourite unappealingly vulgar. Unlike previous films of his, The Favourite comes out okay, anyway. The performances are first-rate, with Olivia Colman earning an Oscar for her sympathetic, funny, grotesque portrait of the Queen. It’s tremendous work and raises the film above its sordid tendencies.

3 thoughts on “The Favourite (2018, Directed by Yorgos Lanthimos) English 6”