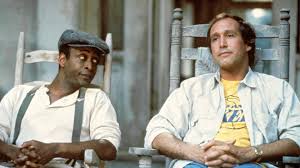 Comedy star Chevy Chase, for the second time portraying Irwin Fletcher, the quick-witted investigative journalist from Cali, reclines on the porch of his newly acquired Louisiana plantation. Sitting next to him is his black servant, Calculus Entropy (Cleavon Little of Blazing Saddles fame). In the distance, the Ku Klux Klan form on his lawn, in full regalia. Their leader toting a bullhorn prepares to read his unholy sermon. “Friends of yours,” Fletch asks his black sidekick. Calculus shakes his head. This is not Mississippi Burning, though Fletch makes a reference to Gene Hackman later in the scene. This is not a drama. It is a comedy, and so the Ku Klux Klan is not to be feared but to be laughed at. In fact, the Klan is not even there for Calculus. Their leader starts his oratory, “The white race will not allow any kind of alien infection to invade our beloved land,” as some lackey in the background asks if anyone remembered to bring a cross. The alien infection he’s talking about is Fletch, the Californian upsetting their way of life. Fletch disappears from his porch and becomes a new Klan member in white bedsheets. He apologizes for being late and introduces himself as Henry Himmler. The Klan seems to accept him as one of theirs without a further inquest. This scene unfolds in the 1989 comedy Fletch Lives ( directed by Michael Ritchie); a film that can easily be discounted as fluff, a silly comedy, or as some moderately successful Chevy Chase vehicle back when he was a star, but there are scenes such as this one which is special. They are exemplars of subversion, reducing powerful institutions to absurdity. I believe we see a similar scene in the dramatically more successful and revered Django Unchained (Tarantino, 2012), where the Ku Klux Klan debate whether they should wear the hoods during a raid. I think there is a more than fair chance that Tarantino has seen this movie and this sequence considering his stated admiration for the director Michael Ritchie.

Ritchie routinely employs satire and subversion in his films, and his ability to make commercial films while not sacrificing that satirical bite deserves admiration. Bad News Bears (1976) dealt with competition and children, Smile (1975) with beauty pageants and small-town hypocrisy, and The Candidate (1972) with politics. But with Fletch Lives, I believe he outdoes himself in terms of ironic expression. He demonstrates not only how comedy can address important social issues which have been greatly evidenced throughout film, but also how comedy can avoid moralizing, easy solutions, and lessons that dramas seem to demand.

One thing that Comedies seem more adept at performing in a meaningful way is acknowledgment; acknowledging a social or political issue. There is a substantial amount of baggage that comes with race and its role in every issue. And comedy depends so much on truth. There is a throwaway line in a far from great film Evolution (2001)  where Eddie Jones (a black man) refuses to thrust himself into danger because, as he states, “I have seen this movie, and the black man always dies first.” That quip is easy to laugh at and move on, but if you dwell on it, you might begin to remember various horror films, Hitchcock films in which the black man does indeed die first, and that could lead to an uncomfortable question. Why is that? Why is the black man expendable? Is he worth less?  Much of the cathartic (or perverse depending on who you ask) pleasure that is derived from those films comes from the imaginative ways that characters are killed off. So when the first person dies, it is supposed to be that moment of catharsis; of excitement, or even joy in experiencing the horror that you chose to experience. But it is hard to attain full catharsis in these older movies where I know the black man dies first and I know why he dies first. Discomfort enters into the equation. So back to Jones’ line, I find it funny not just because he says it with comedic gusto, but also because there is an inequality of value he is pointing to that up to that point had not been expressed. That was only fourteen years ago that someone said hey, it is kind of ridiculous how useless so many black people have been in horror or disaster movies. Now, whatever inequalities still exist, we can say at least black people fare much better in those genres, and we can point to that line as an early example of society recognizing the problem. Soon afterward, black people’s fate in old horror movies became somewhat of a common joke to the point that I would call it a cliché now. When dramas, even great ones such as The Outlaw Josey Wales (Eastwood, 1976) acknowledge injustice, there has to be something to take away. In the aforementioned film, when an Indian tribe leader laments the treatment of his people, it is followed up with Josey Wales’ profound statement, “That’s true. I ain’t promising you nothing extra. I’m just giving you life and you’re giving me life. And I’m saying that men can live together without butchering one another.” It is almost like comedies can get away with not having that moment by operating under the surface. In Ernest Hemingway’s iceberg theory, you had 1/8th above the surface and the rest below. If you imagine the joke, the comedy as the 1/8th above the surface, and the social satire below, I think you will come to the truth of how many comedies operate, and why comedies can often be more fearless in how they attack issues; think of The Daily Show, To Be or Not to Be, or The Interview (regardless of its quality). The Outlaw Josey Wales has its share of sermonizing, but its comedic moments are the ones that I found most provocative, moving, and excoriating. Consider this memorable exchange between Clint Eastwood and Chief Dan George :

It ain’t supposed to be easy to sneak up behind an Indian.

…they call us the “civilized tribe”. They call us “civilized” because we’re easy to sneak up on. White men have been sneaking up on us for years.

Looking again at our film, Fletch Lives, I find one of the promotional posters particularly inspired. Deliberately evoking old Gone With the Wind posters, Chevy Chase in the role of Rhett Butler carries an objectified Scarlet over an image of a plantation burning. This poster marks the territory the film attempts to traverse. Gone With the Wind (Fleming, 1939) is an all-American classic; one of the most popular films of all time. Unfortunately for someone who cannot help but get wrapped up in its grandeur and storytelling, it is a film that blatantly perpetuates backward race mythology and makes the old south look like heaven on Earth-slaves and their white masters were best friends of course. Fletch is aware of this great southern fantasy and has fun with it in what might appear to be an innocuous poster.

There is another scene featuring Fletch imagining himself at his newly inherited southern plantation. The sequence floats in with old gospel music and a scenic shot of the sun glaring through the drooping poplar trees. Fletch, dressed as Colonel Sanders, receives a nice glass of lemonade from his buxom mistress as he gazes upon his white workers across his land. Echoes of the southern paradise myth offered to us by Gone With the Wind. “Give me that boy,” Fletch barks at the man shining his shoes; a white man. His workers are not white out of political correctness in my opinion but as a visual departure from what is considered decent. White field slaves appear at once ridiculous until we remind ourselves that slavery of any kind is of course ridiculous. Fletch is not a kindly master by modern standards. He spits on his shoe-shiner’s head which is received with a “thank you master” which in turn is given a “quiet down boy.” I like this detail because it once again plays on the myth of subservient black characters somehow happy in their role. It is not enough for them to be in the role of servant, they also need to be happy. Next comes a truly brilliant moment in what is mostly merely a decent film. Fletch stands up and walks across his land followed by field hands as he sings “zippity-doo-da.” The song is a reference to the now-defunct Disney film, Song of the South, about a jolly negro named Uncle Remus. During the “zippity-doo-da” scene in Song of the South, Remus interacts with cartoon characters like Br’er Rabbit and his young white masters. The song itself won the Academy Award for Best Original Song in 1948 for its apparently spirited innocence, but actually was based on a civil war song called “zip coon.” The sequence signifies Fletch Lives as no great respecter of classic movies, classic songs, or of regional stereotypes.

Finally, the last great aspect of Fletch Lives is in the character arc of Calculus Entropy. He oscillates between the proud servant whose only dream in life is to be of use to the white man, offensive Amos n Andy caricature, and magic negro (the old black type with infinite wisdom). In the end-spoiler alert- we find out that he was an FBI agent all along. I feel this points to a great deal of intelligent, articulate black men and women subjected to those roles in early cinema. Butterfly Mcqueen of “I don’ know nothin’ bout birthin babies” fame in Gone With the Wind had a college degree for example.  Fletch and Calculus, by the end of the film, aren’t just equals because of political correctness but because they are both investigating the same thing, it turns out. Racial progression in dramas, for example, Mississippi Burning, always manifests itself above the surface. Gene Hackman solves the case. He gets the perpetrators. We can go home and sleep soundly knowing the bad guys were caught. I believe this moment in comedies can go unrecognized since they are not as obvious. But comedies by changing what we find funny can change what we find acceptable.