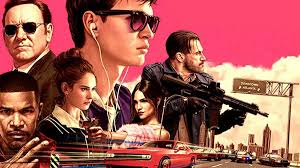 Edgar Wright makes well-worn genre films seem fresh. He doesn’t play by any discernible storytelling rules, and revels in flouting expectations. It’s his greatest attribute as a director and one that he validates more than ever in his newest film, Baby Driver.

The film starts off in high gear, mid-heist, involving Buddy (a tatted-up Jon Hamm), Darling, Griff, and, of course, Baby (Elgort), a whiz kid behind the wheel hampered only by his need for music to drown out his tinnitus. We see Baby’s superhuman ability as a getaway driver, the editing and movement of the characters in step with the bizarre music, and right away we understand that we’re watching something special being done with sound. It harkens back to Walt Disney’s ideas with Fantasia, that you could combine music and imagery to create something unique in film. We get to know the supporting characters in Baby’s life. He’s in love with a beautiful waitress named Debora (James), like the T-Rex song, not like the song by Beck, she tells him. He lives with and cares for an elderly black man who helped raise him after his parents died.  He’s indebted to a criminal mastermind named Doc (Spacey) and realizes that Doc’s never going to let him leave his life of crime. He’s too valuable. Doc considers Baby his good luck charm as the operation’s getaway driver. The crux of the plot hinges around the buildup to a major heist, centering on the money orders at a post office. Baby plans his escape with Debora while working with a group of psychopaths that Doc’s assembled for his latest crime masterpiece: Buddy, Darling, and Bats (possibly the craziest of the group played terrifically by Foxx).

A few things besides the music separate this film from the mass of other slick bank robbery flicks it surpasses. Early in the movie, Baby pulls a job with Bats, and we see violent consequences for the crime. People are killed. Baby struggles with it. There’s a weight to the film that shows director Wright’s immense ability at shifting tones seamlessly, from light to dark, from serious to funny, at will. Secondly, as the film progresses, it becomes more and more unpredictable, which is rarely the case in movies. As soon as you think Wright is setting one situation up, something happens to make that situation impossible, and completely change the direction of the entire film. That takes some getting used to. This quality could lead to disappointment for some of the viewers. I know I’ve seen certain films that on first viewing didn’t match my expectations which led to me being disappointed, but upon second or third viewings, I realized what the films did was actually better than my expectations.

The film’s main selling points are its soundtrack and its action/car sequences. It delivers in full on both counts. The soundtrack is eclectic, funny, cool, original, you name it. I especially enjoyed the use of Barry White in one of the film’s most tense scenes; a showdown between Baby and an enemy. It weaves in and out of songs, altering the sound level depending on Baby’s focus. It’s very well done. The chase sequences are spectacular. They depend much on quick-cut editing, so they aren’t authentic in the same way as some of the old classics like Bullitt or The French Connection, but they carve out their own territory in film history.

If the film has a flaw, I would say its ending was a little too drawn out. It’s not that the ending was bad or unsatisfying, but it lasted just a touch too long. After the unbelievable last car fight scene, it can only be anticlimactic from there. So I would wrap it up.  Overall though, Edgar Wright has made his best movie yet. Ever since his debut with Shaun of the Dead, a romantic comedy/bromance/zombie apocalypse movie, he’s proven to be a true original and an expert genre masher.

One thought on “Baby Driver (2017, Directed by Edgar Wright) English 8”