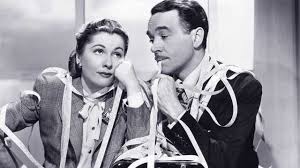 Square, solid Richard Aiken (Abel) has only known Susan (Fontaine) for a few weeks but he’s sure that she’s the one. That is until he meets Roger (Brent), Bill (O’Keefe), and Mike (DeFore), the three men she was with before him. They open his eyes to how little he really knows about her, but, not easily discouraged, he sets out to hear their stories and get to know his bride-to-be. It’s a unique premise for a romantic comedy and the structure of the film make guessing the ending slightly more difficult than your average classic rom-com. In the end, there’s really only one person we want Susan to be with, and naturally, they end up together. There’s also just a hint of the Pygmalion mythology in this story.