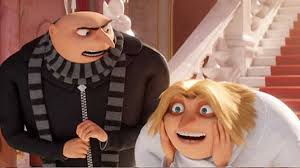 Some film-thirds tie together and conclude epic storylines in spectacular fashion (see The Return of the King or The Dark Knight Rises for examples). The newest Despicable Me film, following the wildly and unexpectedly successful first two entries, does exactly what it did the first two times, with no apparent thoughts of slowing down or concluding. This series is going to go on for a while, more like Ice Age than Batman. And why not? They are relatively inexpensive money-making machines. The first one made half a billion on a 70 million dollar budget. The second nearly doubled that. I only hope that for as long as they make these films, they make them good, and so far, that’s been the case. Despicable Me 3 is an amusingly eccentric, fun, fast-paced, colorful film, much like its predecessors.

This time, Gru (voiced by Carrell), his new wife, Lucy Wilde (Wiig), and three adoptive girls meet Dru (also voiced by Carrell), Gru’s long-lost twin brother. When the two were babies, their parents separated, taking one child with them and keeping the other secret from his brother. Gru’s mother tells him she got second pick. Dru’s a fun-loving, gregarious type, but he doesn’t have the intelligence of Gru. So he tells his brother about their family’s history of masterminding great feats of villainy, and how he needs his help fulfilling his legacy. Gru’s given up villainy though, becoming an agent against crime along with his wife. Eventually, Dru brings Gru out of retirement, and the two plan to steal a precious jewel from Balthazar Bratt, an ’80s has-been turned supervillain.

One of the chief pleasures of these films has been the use of classic cartoonish humor. A character coming to see Gru is strapped to a rocket, launched into orbit, crash lands back on Earth, and limps his way back to Gru’s lawn. It’s Looney Tunes seen in modern three dimensional animation. Another hallmark of these films has been Pharrell Williams accomplished soundtracks, spawning the hit song “Happy” in the second entry. I doubt any of the songs this time around score that level of success, but they still work well with the movie. Third and finally, the voice acting is always on point, Carrell, Wiig, and Parker’s voices fully integrated within their characters.

I have no real complaints against the film except that I’ve seen this before. The combination of sweet and funny should work again to make the studio rich and the audience happy. Worth watching for those who love animation.